The Gas Distribution Network: how does it work?

When you turn on your gas cooker or fire up your boiler you take it for granted that gas will be freely flowing through the pipes to the application in question. The fact that you’re able to do so is thanks, in large part, to the gas distribution network and is an important part of energy distribution in the UK.
Last updated: April 2022 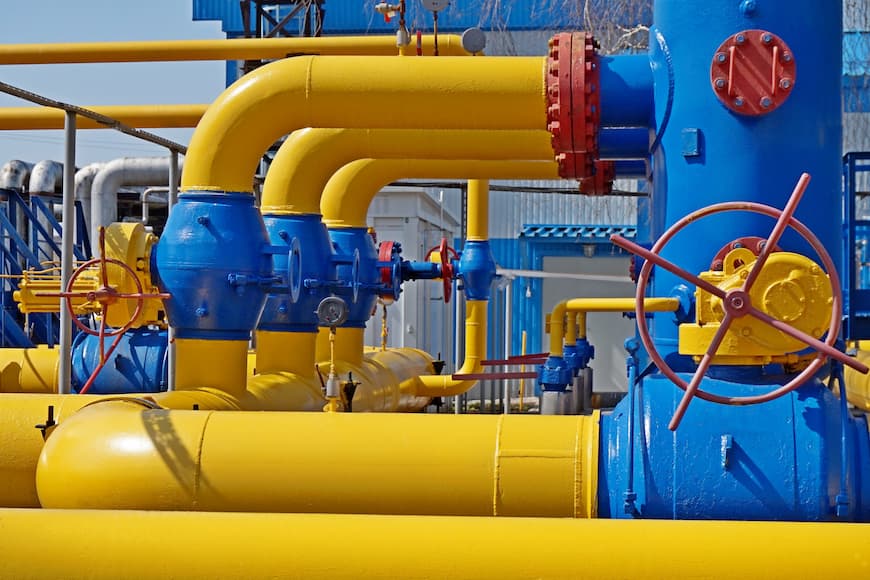 The gas distribution network is a system which transmits natural gas across the whole of the UK. It involves gas being stored at differing pressures and temperatures so that it is always available when consumers need it, whether that means supplying gas to domestic users wanting to boil a kettle for a cup of tea, fuelling the vast furnaces which help to power some of our largest manufacturers or keeping the schools, hospitals and public buildings upon which we all depend warm and dry. We’re taking a look at who owns and runs the gas distribution network and what this means for you as a consumer.

Who owns the gas distribution network?

The regions of the UK which fall under each of these groups can be seen in the following image: 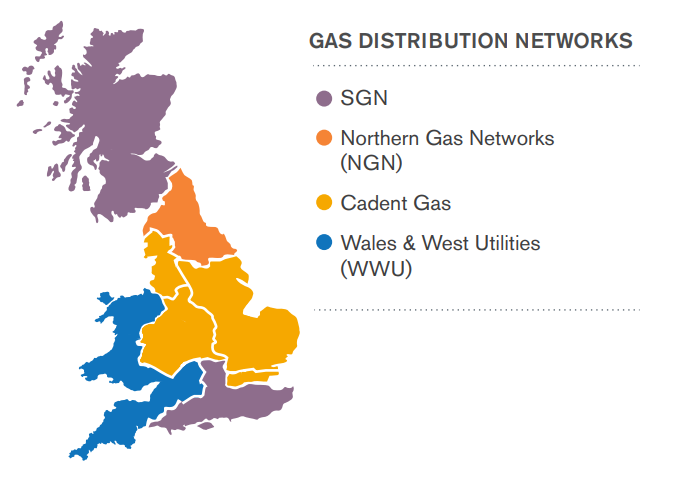 They break down as follows:

How many people does the gas distribution network serve?

Gas distribution networks also have a very important role to play in ensuring the safety of the UK gas supply, they are responsible for maintaining the integrity of the systems and they are the people who should be contacted if a gas leak is ever suspected.

What number should I call if I suspect a gas leak?

For the same of simplicity the number to call if you think you have a gas leak is the same no matter which part of the UK you are in. It is 0800 111 999.
At the same time as calling the number to report the suspected leak you should open all doors and windows, turn off the gas supply at the meter and do not use electric lights or naked flames.

What are the gas distribution networks responsible for?

Gas distribution networks are responsible for the following:

The gas distribution networks are not responsible for the following:

The gas distribution networks are funded by the income generated from selling the gas on to the energy suppliers. This is then reflected in the charges which the suppliers place on end users. The amount of income GDNs can collect and the amount they have to re-invest into their networks is set by Ofgem in recognition of the fact that each GDN is a monopoly. The prices are fixed for an eight year period in a way which it is hoped will encourage a sustainable energy network which innovates in order to deliver value for money.

What is the Energy Network Association?

The contact details for the customer care departments of the four owners of the gas distribution network are as follows:

What are independent gas transporters?

Although the gas distribution networks detailed above enable gas to be supplied to the vast majority of customers in the UK, there are also a number of independent gas transporters (IGT) which deliver gas to approximately a million customers, mainly in rural areas and when connections need to be made to new commercial or residential developments. The IGTs which currently operate in the UK are:

How do I find out if I’m being supplied by an IGT?

If you look at your latest gas bill you’ll find a reference number between six and ten digits long, known as the MPRN (Meter Point reference) number. If this number begins with the numbers 74,75,76 or 77 it means that your gas is being supplied by an IGT.

There are a few circumstances under which you might need to connect to the gas network and these include:

How do I connect my property to the gas network?

If you need to be connected in this way you’ll first have to contact your distribution network operator (DNO). As explained above, the identity of your DNO will be governed by your geographical location. You can find put who your DNO is by visiting the ‘Who’s my network operator?’ page of the Energy Networks Association website. The process involves simply entering your postcode, at which the details of your gas network operator will be provided, complete with the relevant telephone number. In most cases you will have to pay for the connection in advance, with the cost dictated by factors such as your exact location and the length of time the work will take. The price will cover the cost of assets which will be solely for your own use (i.e. the gas meter) and a percentage of any costs incurred for reinforcing the wider network.

The methodology which the DNO uses to calculate the cost will be published on the DNO website and will have been approved by the industry watchdog Ofgem. Once you’ve provided the information the DNO needs they have to offer you a price for the connection within three months, and the offer should include an explanation of how they calculated the price they are charging. Ofgem sets specific standards of performance for a DNO providing connection services, and if your DNO doesn’t meet those standards they will have to pay you compensation.

Where does the gas distribution network store gas?

In order to ensure that there is always plenty of gas to meet the needs of customers a percentage of the gas which comes to the UK from offshore has to be stored. There are currently six medium and short term gas storage facilities across the UK, located in the following places:

Taken as a whole, these facilities mean that there is a UK storage capacity of 1.44 billion cubic metres.

How safe is the gas distribution network?

As might be expected, there are many rules and regulations governing the transportation of gas around the UK. These include the Gas Safety (Management) Regulations 1996, which state that gas transporters have to prepare a safety case which must be approved by the HSE (Health and Safety Executive). Over and above these regulations is the Gas Act, which covers all gas operations in the UK. Under the Gas Act, many activities involving gas are prohibited unless the person or company involved has a licence to engage in those activities. These activities include:

What is a gas transporter?

A gas transporter is someone who owns and runs a pipeline system in the UK, shifting gas from one part of that system to another. Each of the DNOs has a gas transporters licence, which means that they are forbidden from holding a licence to be a gas shipper or gas supplier. Under the terms of their licence, each gas transporter has a responsibility to ensure that the gas within their pipeline is sufficient to meet the demand which is placed on it. The tariffs charged by Ofgem, which form a part of the bills paid by customers, are regulated by Ofgem.

What is a gas shipper?

A gas shipper takes out a contract with the gas transporter to transport gas across their pipelines. In most cases a gas shipper will enter a contract with a supplier such as an offshore producer or an importer of Liquid Natural Gas (LNG) to purchase the gas when it enters the UK. In many cases the gas suppliers will also operate as gas shippers, holding both types of licence.

What is a gas supplier?

For many years gas suppliers were free to operate without any price controls in place, but this has changed more recently. An inquiry by the Competition and Markets Authority (CMA) led to a price cap being put on the prices charged for ‘pre-payment’ meters, followed not long after by a similar cap on the price which could be charged for the ‘standard variable tarriff’, the type of tariff which the majority of consumers find themselves on. Somewhat predictably, the imposition of a price cap meant that the various suppliers pushed their prices up to meet that cap, meaning that competition was discouraged, and that the only sensible means of ensuring the best possible price for energy was to switch suppliers on a regular basis.

The gas distribution networks are regulated by Ofgem, which issues licences allowing them to operate. Because the networks are monopolies within the regions they cover, the conditions of the licences are set to ensure that the networks can only generate a specific amount of revenue.

What should I do if I find a damaged gas pipe?

If you find a damaged gas pipe or damage one while working outside you need to move away from the pipe as quickly as possible and try to make sure that other people stay some distance from it. You should then call the emergency gas phone line on 0800 111 999. The line is open 24 hours a day.##How do I find out who my gas supplier is?

You can find out who supplies gas to your property by visiting the Find My Supplier web page, where you’ll simply be asked to enter your house number and post code. Alternatively, you could call the Meter Point Administration Service on 0870 608 1524.

Who is responsible for gas pipes?

In the vast majority of cases the National Grid is responsible for the gas pipes which run underground to carry gas to the local distribution networks. The exception to this is the one million homes or so which are served by Independent Gas Transporters.