Although tidal power might seem like a relatively new concept, it has actually been used by people all over the world for hundreds of years. Tidal powered dams and water wheels have been used to grind flour and make bread since the 10th century.Tidal power is, as you might expect, the process of producing energy from the tidal forces of the sea. In essence, it is harnessing the power of the gravitational pull of the moon and other celestial bodies, which causes the earth’s water to move in cycles. It is a renewable energy source, meaning it should never run out. In this article, we will break down everything related to tidal power for you.
Last updated: April 2022 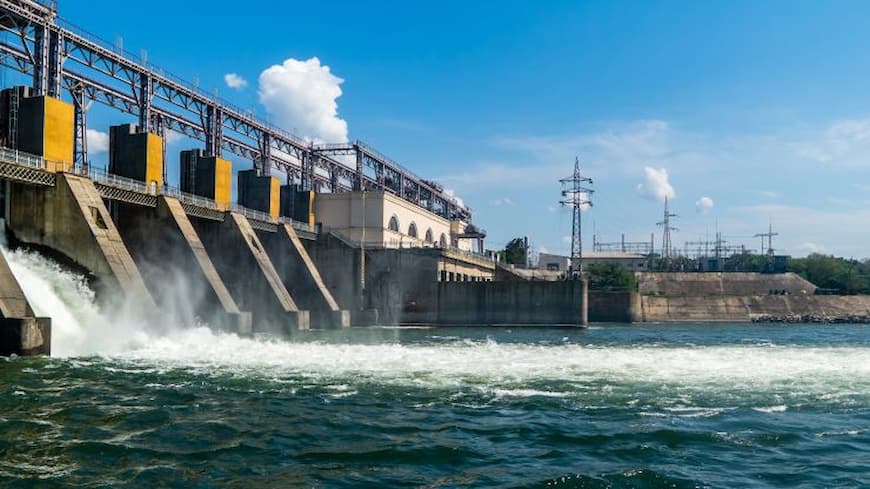 Here in the UK, there is an increasing move towards renewable energy sources such as wind, and tidal is also forming a big part of that. As an island, we are surrounded by coastline with large tidal ranges, which makes us ideally placed to benefit from the gravitational energy of the moon.

How does tidal power work?

In order to understand how tidal power functions, first you need to understand how the tides work. As the moon orbits the earth it exerts a gravitational pull on everything. Whilst we might not feel this, it is most clearly seen in the large bodies of water such as the seas and oceans.

The moon drags with it these large masses of water as it passes, causing large tidal surges twice a day. This results in levels of water being higher and lower in specific places, at certain times of the day.

The tide is reliable and very predictable which makes it ideal for producing energy. And there are four times a day when we can use this change in levels to generate electricity – twice when the tide is coming in and twice when it’s going out. This means it has enormous potential. And better still, it is completely renewable. As long as the moon is in the sky and orbiting we have tidal energy to tap into.

There are currently three main types of tidal power. These are:

A tidal stream is a fast flowing body of water created by tides. A turbine is placed into this stream and harnesses the energy as it passes through. However, this can be complex because placing anything in a tidal stream poses complicated engineering problems. It can also disrupt the tidal flow that provides the energy and there can be a wider environmental impact to consider too.

The turbines are most effective in shallow water which also allows wildlife and ships to navigate around them. The world’s first tidal stream power station was built in 2007 at Strangford Lough in Northern Ireland, although this was mostly an experiment and has now been decommissioned.

A tidal barrage is caused by creating a large dam called a barrage. Water can then spill over the top, passing through the turbines which are built into the structure. They are most effective when built across tidal rivers, bays and estuaries.

The barrage gate opens as the tide rises allowing water in. It is then released through the barrage creating energy. Tidal barrages are more complicated than tidal streams as they involve a larger amount of turbines. The plant built in 1966 at La Rance near St Malo in France is a tidal barrage design.

Tidal lagoons produce another type of tidal energy. This involves creating a body of water enclosed by a natural or manmade barrier. The energy creation then takes place in much the same way as a barrage. However, tidal lagoons can generate continuous electricity as they can be operating both when filling and emptying. They also have the benefit of having a more minimal environmental impact.

Tidal power is considered the most reliable form of renewable energy. That’s because the tides happen twice every day. They are not reliant on environmental factors such as wind or weather patterns like other renewable energy. That means energy production is guaranteed. The tides are very predictable and easy to measure, which means tidal energy can be controlled and constructed in the most efficient way possible.

Some forms of tidal power can operate both when the tide is coming in and going out, so there is no downtime in production. This is not true of solar, which can only work in daylight hours and works best when there is sunshine. While the UK is one of the windiest places in Europe, it is not guaranteed and on calmer days turbines can sit idle.

What are the advantages of tidal energy?

As we move away from the unsustainable and non-renewable ways of generating energy, such as burning coal, gas and oil, we are looking for ways of producing clean energy. Methods such as wind and solar are becoming a major way of creating this from renewable sources, harnessing the natural energy in the atmosphere.

However, one of the most reliable and efficient ways of creating energy is by using the power of the tides. Here in the UK we are surrounded by water crashing against our shores, unleashing a huge amount of energy every day. If we can use this power it could form a major part of the UK’s overall energy mix.

Tidal energy is also very efficient. It stands at about 80% efficiency, which means that around four fifths of the energy stored in the water can be utilised as it passes through the turbine. When you compare this to coal at about 33% you see why it is a good option. It is even more efficient than other renewable forms, such as wind (50% maximum when conditions are good) and solar (up to about 23% on modern panels).

What are the disadvantages of tidal energy

However, it is not all good news. As well as a lengthy list of reasons why tidal energy is having a positive impact on the UK energy sector, there are also some drawbacks. These include:

The environmental impact is a serious concern, as is the fact that there is a lot of opposition to building large industrial energy production plants in areas of natural beauty on or near coastlines. One of the big challenges for tidal energy is to be able to find ways of creating energy without destroying or disrupting ecosystems.

What are the costs of tidal energy?

Of course, no energy production is without its costs. While the tides are a naturally occurring phenomenon, creating the infrastructure to use this power can be very expensive. This is true in comparison to other forms of renewable energy.

While it is thought that tidal energy could eventually make up around 12 to 15% of the UK’s energy mix, it is more expensive to produce. It is estimated that tidal energy would cost about 66p per kWh to produce, compared to around 20 to 30p for offshore wind. However, it is not just the financial cost that needs to be considered. There are also environmental factors, plus the long term usefulness of infrastructure to think about.

There are currently two tidal power stations operational in the UK: Bluemull and Meygen, both in Scotland. However, there are several more both under construction or planned for building in the near future.

These include the Alderney tidal plant, a Severn barrage, Skerries tidal stream and a tidal lagoon in Swansea. There has also been funding approved for a Mersey barrage and Wyre barrage which could see the UK’s tidal production increase rapidly over the coming years.

Despite objection to tidal power in some places, the fact that it can produce so much green energy makes it a viable solution. Designers need to find ways to minimise impact while playing up the positive effects of tidal power for local and national communities.

The UK’s tidal power resource is estimated to be around 10GW, which represents around 50% of Europe’s tidal energy capacity. Currently that represents around 4% of the UK’s energy production but studies have shown that this could be increased to reach around 25 to 30GW, which would be enough to meet around 12% of the total energy requirements in the UK. Much of this would come from planned tidal developments on the Severn estuary.

Tidal stations around the world

There are currently nine tidal power stations in operation around the world. The largest of these is Sihwa Lake in South Korea, which is capable of producing 254 MWh a year. This is one of two in the country. Other countries with tidal power plants include Russia, Canada, China, France and the Netherlands.

South Korea, the UK, Russia and India are all planning to build more tidal power stations in the coming years.

For more information on this topic, check out these guides:

What is tidal power?

Tidal power is the process of generating power and electricity from the tides of the sea. It harnesses the power of the gravitational force of the moon and other celestial bodies, which in turn causes the earth’s water to move. The water passes through large turbines placed at strategic points to collect the energy, turning it into electricity which can be sent into the grid.

There are currently nine active tidal power plants in the world, with the first opening in France back in 1966. More are planned in countries such as South Korea, Russia, France and the UK.

Do we use tidal power in the UK?

The UK is just one of a handful of countries in the world that uses tidal power, and is planning to build more tidal energy plants in the coming years. It is estimated that once all the planned tidal power plants are finished, tidal power could account for as much as 12 to 15% of the UK’s energy mix.

What are the disadvantages of tidal energy?

There are many plus sides to using tidal energy. It’s very clean and produces no harmful waste materials. It’s very efficient, at about 80%. And it’s capable of producing continuous electricity as it is not depending on environmental factors. However, it’s not all good news. Like any form of energy production, there are some downsides and costs.

The main issue is that to build the infrastructure needed to generate tidal power you need massive amounts of investment. These large scale projects can also cause lasting damage to the ecosystems where they are located. Tidal power is also restricted by geographical factors and is not suitable for every coastline. Opposition to tidal power plants can also be significant.

Although there are some downsides to tidal power, it’s also true that it’s one of the cleanest, most reliable and most efficient ways of generating electricity. At around 80% efficiency and with tides changing all the time, tidal power has huge potential to provide the world with a renewable source of clean energy.

The tides change twice a day and some forms of tidal energy can operate both when the tide is coming in and going out.